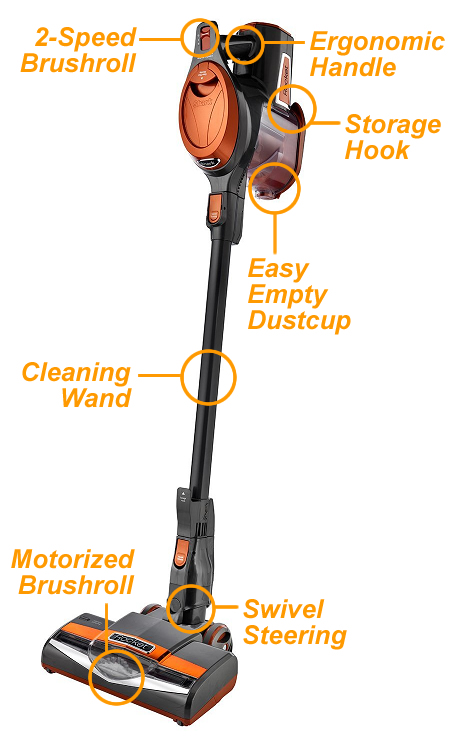 It looks familiar doesn’t it? If it hasn’t struck you by now, the Shark Rocket Ultralight Upright HV302 is pretty much a less expensive version of Dyson’s handheld stick models such as the DC59 Animal, which is almost double the price. In this review, I’ll be looking at if the Shark Rocket HV302 can be compared with the Dysons or if it’s just a cheap rip-off.

Strong & Consistent Suction Power – This is good enough to rival the higher end Dysons and that’s because it’s the vacuum is powered by the mains. This means that suction will always remain strong and you will never run out of power, which cannot be said for cordless models.

Extra Long Cord – Even though it’s not cordless, fortunately you get a very long 30 foot power cord that’s long enough to go from room to room without unplugging.

Easily Clean Multiple Areas/Surfaces – Because of all the different attachments that you get with this vacuum, you can clean multiple surfaces including hardwood floors, carpets and rugs, tiles, pet hair and inside cars.

Excellent Value For Money – There has been a few customers dissatisfied with the price of the Shark Rocket HV302. However, considering the closest best thing to this vacuum is the Dyson at double the price, we and many others believe it offers great value.

5 Year Warranty – Yes, on top of everything, your product will be covered for 5 years (Dyson only provides 2 year warranty), giving consumers extra peace of mind.

The people that know best about the product are those who have actually purchased and tested it out over a period of time. We have researched over 30 positive and negative user reviews on Amazon to provide you with the good and bad points of their experiences with the Shark Rocket HV302.

If you hadn’t already noticed, the design of the Rocket HV302 is very similar to Dyson’s handheld stick vacuums. This isn’t a problem because the design works, and is easy to operate.

The handle is ergonomically designed to that it’s comfortable to hold, and it’s also much lighter than it looks (weighing approx.. 7.5lbs), making it very easy to maneuver around.

The dirt canister is opened from the bottom where there’s a latch, just like the Dysons, and out comes its contents (just make sure you’re above a bin when you open the latch!).

The capacity of the canister is a little small at only 0.472 litres, meaning that you may have to empty it after each cleaning session.

Some of the main differences in terms of design between this and the Dyson handhelds are:

When you’re finished with your cleaning, then you can simply mount it onto the included wall mount via the storage hook that’s located just behind the dirt canister latch. If you prefer not to wall mount it, then the main section of the vacuum can be hooked onto the bottom of the wand.

There’s a multitude of attachments and accessories you get with the Shark Rocket HV302. The main one being the motor driven brushroll which does all the strenuous task of floor cleaning.

The 12 inch crevice tool is great for getting into narrow areas while the dusting brush is useful for dusting down worktop surfaces. If you want to dust down and clean delicate or awkward surfaces such as your car dashboard of a computer keyboard, then the car detail kit (micro tools) will do that for you.

The pet upholstery tool does a really great job of removing pet hair from curtains and upholstery, thanks to its wide mouth and short sturdy bristles.

One of the standout attachments is the high quality build Dust Away Attachment which is basically a wide floor tool with a reusable microfiber cleaning pad attached, designed to get your hard floors spotless from dirt and debris without damaging it. Many users have praised this attachment as well as the main floor brushroll.

I guess the only downside of having all these attachments is that you have to carry them around in the included accessories bag if you plan on using them all. There is no on-board storage either on the wall mount or the vacuum itself.

Comparing the suction power of Dyson’s latest model (which is more than twice as expensive), the DC59 with the Shark Rocket HV302, I think you would be surprised that there isn’t much difference in terms of suction power.

As a matter of fact, many users have even stated that the Shark Rocket HV302 actually seems more powerful. One things for sure though, there’s no loss of suction and the power will last indefinitely since it’s powered by the mains.

Like the Dyson, the Rocket HV302 has two speeds which directly controls the electric motor driven brushroll – Low for hardwood floors and tiles (or any other delicate surfaces), and High for carpets and rugs.

This is controllable just above the handle, and the transition from low to high is smooth. It has been praised for doing a great job of deep carpet cleaning and effectively removing dirt from hard surfaces.

Emptying the dirt canister couldn’t be easier. Just open the latch at the bottom by pushing the button at the front, and it’s as simple as that. It pretty much opens quite easily.

There’s a big foam filter filter located within the latch on the top section of the vacuum that you should wash probably once a month to ensure you don’t lose any suction. You can wash this with water and add soap if you want, but make sure that it’s completely dry before using it again.

There have been very few users complaining about any sort of unreliability of the Shark Rocket HV302. Build quality is good and though certain accessories may look a bit cheap, they do the job without looking flashy.

Also, since there is no battery (perhaps the most common component that goes faulty in cordless vacuums), you won’t have to worry about your vacuum dying on you.

The 5 year warranty that Shark includes for the HV302 tells you that they are highly confident in their product, which is another reason why it’s so popular despite it being more expensive than other handheld stick vacuums not named Dyson.

The Shark Rocket HV302 has an overall positive review rating on Amazon.

Here’s a short review from a user that demonstrates the many facets of the Shark Rocket HV302.

If you had previously been looking at any sort of handheld Dyson vacuum (most notable the DC44 Animal or DC59 Animal) but cannot bear to spend half a grand on a vacuum, then I encourage you to check out the Shark Rocket Ultralight Upright HV302 instead.

Granted, it’s still more expensive than most handheld and stick vacuums, but it does a much better job than most of them. Not to mention that it’s likely to last many years to come.