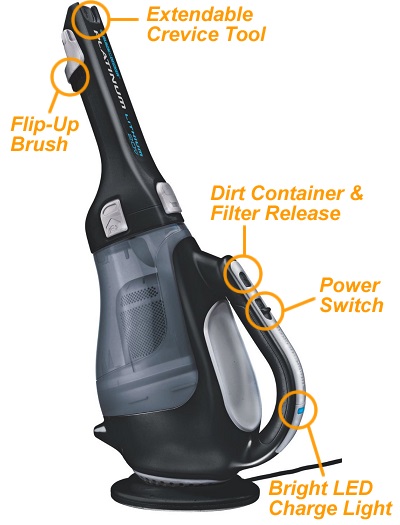 The Black & Decker BDH2000L Platinum holds a huge resemblance to certain DustBuster models by the same manufacturer. Although they look the same, the Platinum BDH2000L is notably ahead in two departments – Power and battery performance.

Those are exactly what the emphasis is on in the Platinum range, and users have generally been impressed by just how long it lasts, much more so when compared to other handheld vacuums. It’s because of these reasons that many consumers are willing to fork out a bit of extra money for a longer and stronger performance.

Long Lasting Battery: The integrated Lithium Ion battery can hold a charge for up to 18 months, charge up to 6 times faster than other batteries, and the Smart Charge technology allows the device to charge only when necessary. As a result, the battery remains in better condition and will have a longer lifespan.

Long Run Time: Once again, thanks to the Lithium Ion battery and B&D’s Smart Technology, this handheld vacuum has a very long run time. Users have generally been getting anywhere between 25-40 minutes of continuous use, which is very impressive for a cordless handheld vacuum.

Good & Consistent Suction Power: The Cyclonic Action Technology helps to keep the filter clean by spinning dust and dirt away from it, so that there is no hindrance to the suction performance.

Reach Narrow Spaces & Far-To-Reach Places: The slim rotating nozzle with a slide-out crevice tool on the tip ensures that you can reach into difficult areas by rotating and extending itself.

Can Clean Large Debris: At the end of the nozzle features a wide mouth design, big enough to suck up various sized debris.

Easy To Clean: The dirt container and filter can be completely separated from the base, making it easier to rinse under water for a better clean.

No Loose Items To Misplace: All attachments are located on-board. The brush is attached underneath the nozzle and the crevice tool is built-in.

The people that know best about the product are those who have actually purchased and tested it out over a period of time. We have researched over 70 positive and negative user reviews on Amazon to provide you with a general consensus of their experiences with the Black & Decker BDH2000L.

At 24 air watts, the suction power of the BDH2000L is better than many other DustBusters, and certainly good (but not great) for a cordless handheld vacuum cleaner. Users find that it’s most suitable for light pickups such as dog food, leaves, small stones and debris, small coins etc.

Despite the thin nozzle, it also is found to do an adequate job picking up loose pet hair with the help of the attached brush (a dedicated pet hair tool is not included). However, the suction is not strong enough to clean ground-in dirt, a task that really requires a revolving brush such as the one seen on the Hoover Platinum Linx Pet.

A few users have expressed their displeasure at the noise level of the motor, which can be described as a high-pitched hair dryer sound. Nonetheless, it’s not much louder than many other handheld vacuums that possess around the same amount of power.

The BDH2000L uses the same 20V Max Lithium-Ion battery as the BDH2000FL, so users also experience the same benefits. They both hold its power well without loss of suction even when it’s coming to the end of its charge, and they also charge when necessary by using Smart Charge Technology, so you can constantly leave the vacuum on its charging dock.

The only difference appears to be that users have experienced longer running times on the BDH2000L, around 25-30 minutes of continuous use from a full charge, which is one of the best for a cordless handheld vacuum. Semi-continuous use has provided certain users an impressive 40-60 minutes power.

It’s quite easy to become attracted to the sleek silver on black design of the Platinum BDH2000L. It doesn’t look out of place or stand out too much if it were to be displayed. Weighing in at just 2.9lbs, that makes it one of the lightest handheld vacuums around, and users have described its handling to be comfortable and well balanced.

Like many other DustBusters from Black & Decker, it features a slim rotating nozzle with a slide-out crevice tool at the tip. This combination makes it easy to reach into different nooks and crannies.

However, a few users pointed out a design flaw. The on/off power switch is located on the handle, and just above it is the release button for the dirt container and filter. It can easily be accidentally pressed during use, separating the body in two which in turn, will cause all of the dirt container’s contents to fly out. Messy indeed. So extra precaution should always be taken when turning the device on and off.

One of the best features of the BDH2000L is its extending crevice tool, which slides out from the tip to provide an extra reach of around 6 inches. Some users had the problem of the extended crevice tool being pushed back in during use, but it must be fully extended and tugged firmly until it clicks into place.

At the end of the tip is the brush, which flips upwards from beneath. It has proven to be useful for cleaning and dusting floor boards, door panels and tiles. But just like the brush on the BDH2000FL model, the bristles only cover three sides (top and both sides). This just makes its cleaning ability slightly more ineffective because suction can escape through the gap at the bottom.

The charging dock station just consists of a round plate that allows the vacuum to sit on it vertically. The connectors are at located at the bottom of the vacuum slightly off center, so in order for it to charge, it must be placed on the dock in the correct position.

A few users are not too fond with the big blue LED light that’s bright enough to illuminate an entire small room in the dark. Some users solve this issue by sticking a bit of black tape over it, while leaving a thin slit, while others prefer to just leave it to double up as a night light.

The most common complaint about the charging dock is that it cannot be wall mounted. Those who have owned previous versions of DustBusters will know that the charging dock for those models can be mounted, so it’s a bit disappointing that this one cannot be. Since the vacuum sits vertically on the dock, you can install a stable platform on the wall for the docking station to rest on.

It’s very simple to disconnect the dirt container and filter. Just above the power button is the release filter (read the design & attachments section above to see the problem with having the buttons too close together) which separates the body in half. You must always hold onto both ends of the vacuum when pressing this button, otherwise the head will just drop straight to the floor.

The dirt container is clear so you know exactly when it’s time to empty it, and the VF110FC filter is located just behind the container. Both can be removed entirely to be rinsed under water. They need to be dry before putting them back together with the main body.

Users find that the build quality is sturdy and the Max Lithium-Ion battery is well regarded as being a long lasting component. Unfortunately, the battery cannot be removed or replaced, so when it comes to the end of its life, the entire vacuum cannot be used.

The good news is that the battery usually will last at least several years. Black & Decker provide a 3 year warranty for this product anyway, so that gives many users peace of mind.

Watch a demonstration of the BDH2000L below. Yes, we know it’s an advertisement but it pretty much does what it says in the video.

The Platinum name suggests an expensive price tag, and certain users do think that it’s a bit too much. But we believe that the Platinum BDH2000L actually quite reasonable given the long running time, consistent suction power with no fading and quick charging times.