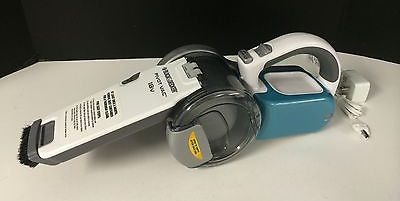 Thanks to it being one of the bestselling and most popular handheld vacuums, the Black and Decker Pivot PHV1810 has become a permanent fixture in Black & Decker’s range of hand vacs.

This means that the PHV1810 is continually updated and in my review, I’ll be looking in-depth on just how good the latest model is compared to some of the more recent handheld vacuums.

Excellent Suction Power – From the original right through to the latest model, the PHV1810 has always maintained great suction power at 35 air watts, which is much better than the majority of other hand vacs around its price range.

Innovative Pivot Movement – If you hadn’t already noticed, it has a front nozzle which pivots just over 180 degrees which allows you to conveniently reach awkward places such as above wardrobes, and it also folds in half for compact storage.

Large Dirt Canister – It has a 0.5 liter translucent dirt canister which is larger than many other hand vacs. This means that you can see when it needs emptying but you also don’t have to empty it as often.

Excellent Value For Money – The reason why the Pivot PHV1810 is such a good seller is because it has great specifications relative to its price point. It’s very difficult for other handheld vacuums to compete.

2 Year Warranty – Another reason to be impressed is the fact that there’s a two year warranty on it which covers manufacturing faults.

The Black & Decker Pivot PHV1810 is a very popular handheld cordless vacuum with over 1500 user reviews. It’s safe to say that it has been thoroughly tested by people that matter the most, real life customers. We have researched over 50 positive and negative user reviews on Amazon to provide you with the good and bad points of their experiences with this hand vac.

I’ve got to admit, it’s surprising to see a low priced handheld vacuum with as much power as the Pivot PHV1810. Its 35 air watts is equal to that of its premium counterpart, the Pivot BDH2000PL, but this is appears to be a bit quieter. They both have the Cyclonic Action Technology integrated which makes dirt spin away from the filter in order to maintain the suction power of the vacuum. 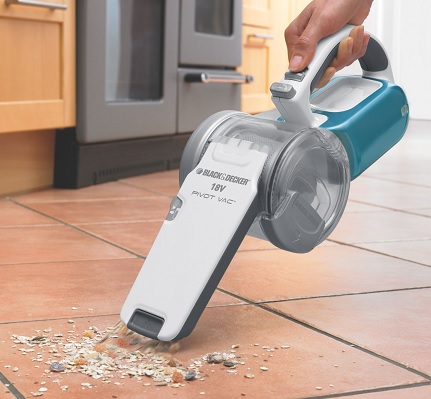 The Pivot PHV1810 houses an 18 volt NiCad battery which is largely responsible for its impressive suction power. Run time is around 15 minutes on average. Not amazing but quite typical for most hand vacs.

But the disappointing aspect of this is that most users have found that its suction power fades around the half way mark and continues to slowly diminish until the battery is completely drained.

On a side note, if you want a NiCad battery to last longer, it may help to fully discharge the battery once every 1-3 months and as a result, it should last around 3 times longer on average. 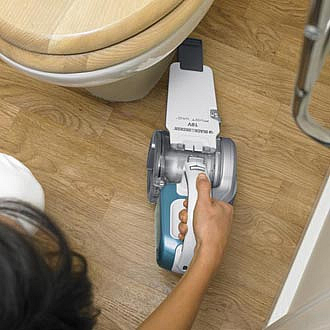 Being such a clever and convenient design has made quick vacuuming tasks much easier. The nozzle rotates around the center point allows it to be maneuvered into a position where cleaning the tops of high furniture is easy, as well as folding it and storing it away.

For a further reach, it has a slide-out crevice tool built into the front of the nozzle which extends out at around 4 inches. This is real handy for smaller object in tight areas. Also integrated underneath the nozzle is a flip-up brush designed for dusting, though many users don’t find much use for this brush.

It would’ve been much better if there was a charging dock included, but at this price point, certain sacrifices have to be made. Some users have complained about dirt occasionally falling out of the chute when the vac is turned off. This can be annoying but it’s a problem that Black & Decker noticed and rectified in the Pivot BDH2000PL model. Of course, this wouldn’t be a problem if you emptied the canister after each use.

The good news is that the dirt canister is 0.5 liters, a good size which is better than most other handheld vacuums. The cover is also translucent so you can see when it needs emptying. There are some issues however when it comes to cleaning the unit. 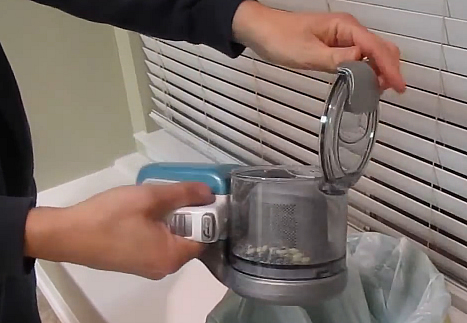 Firstly, the hinge for the canister is plastic and can break if too much force is exerted when opening the cover. This is a minor problem but something to bear in mind. Secondly, in order to remove the filter to clean, you need to remove the entire chute to get to it. It’s a bit more work but not exactly rocket science.

The Black & Decker Pivot PHV1810 has an overall positive rating on Amazon.

Here’s a short 3 minute video review by Vacuum Wizard which goes over some of the main points of the PHV1810 and its performance.

After all points are analyzed, I’ve come to the conclusion that the Black & Decker PHV1810 is a powerful handheld vacuum that offers excellent value for money for those who are on a budget.

Although it doesn’t match up to the battery performance and design improvements as seen on its more premium successor, the Pivot BDH2000PL, it certainly is a less expensive viable alternative. Many consumers agree which is why it’s still immensely popular.

Get The Live Prices On The Black & Decker Pivot PHV1810 Handheld Vacuum Now!