The DustBuster range of handheld vacuums from Black & Decker have been in production for the last 20 years or so, and it looks like the CHV1410L is one of the best to come out of their line. It has made huge improvements from previous models in terms of suction power and battery life, and even stands head and shoulders above B&D’s other current DustBuster models.

This is the most powerful DustBuster that employs the use of a Lithium Ion battery, which excels in the charge and run time departments, as well as lifetime. It’s also the highest rated DustBuster on Amazon and one of B&D’s most popular handheld vacuums.

Battery Lasts Longer: By using a Lithium Ion battery with its Smart Technology, the DustBuster CHV1410L can hold a charge for up to 18 months and charges up to 5 times quicker than NiCad batteries. Essentially, this means that the battery will also have a greater life span as it experiences no memory loss during charging times.

Uses Up To 50% Less Energy: Built-in Smart Technology can reduce energy by up to 50%, and as a result, the vacuum requires less charging as the run time lasts longer, which saves you money on energy bills.

Suction Power Remains Strong: By implementing the Cyclonic Action Technology, dust and debris that enter the vacuum spins away from the filter so that it doesn’t negatively affect the suction performance.

No Loose Accessories To Misplace: The little amount of accessories/attachments that it does come with are all located on-board. Firstly, the crevice tool is built-in and slides out from the tip and secondly, the brush attachment is located below the tip.

Can Suck Up Large Debris: Incorporates a wide mouth design, allowing the vacuum to easily pick up large dirt and debris.

The people that know best about the product are those who have actually purchased and tested it out over a period of time. We have researched over 50 positive and negative user reviews on Amazon to provide you with a general consensus of their experiences with the product.

It has been generally complemented as a lightweight and a comfortable to hold device, but the thing that most users like about the Black and Decker CHV1410L is the built-in extendable crevice tool, which is useful for cleaning cobwebs and dust from underneath sofas and dressers. 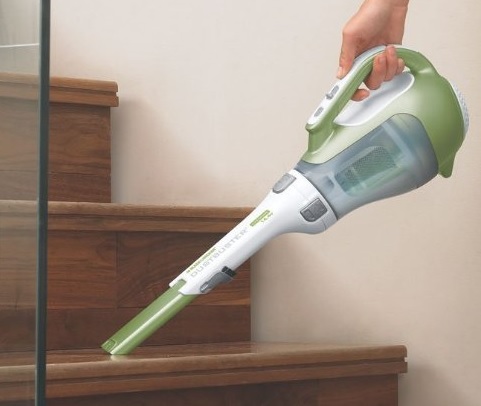 Few people have had issues with how loose the crevice tool is, so it needs to be mentioned that it needs to be pulled out so it fully extends and locks into place. Also included is a brush tool that is stored beneath the tip, but many users feel that it’s pretty useless and can do without it, though some have found it useful for grabbing pet hair.

Many people have stated that they would have liked a charging dock that can be wall mounted, but for the most part, this is a preference rather than a necessity.

However, a feature that causes a nuisance is the bright blue LED light that constantly flashes when it’s charging and remains steady when it’s not. Some users have easily solved the problem by sticking a bit of tape over it.

Another plus point that has made user’s lives easier is how easy it the CHV1410L is to clean. The dust bowl swiftly pops loose by pressing the side tabs to unlock it, then empty its contents straight into the bin. When the dust bowl is detached, the filter can be taken out and rinsed also.

The battery performance is the main selling point and as it turns out, nearly all that is claimed from the manufacturer is true. Those who have owned any type of DustBuster before have mentioned the big improvement, and this is due to the fact that previous DustBusters used NiCad batteries while the CHV1410L uses Lithium Ion.

A large majority of users have noted how impressed they were with its quick charge and run times, and its ability to maintain the same strong suction power even when the battery is running low on power. The majority of users got between a 15-30 minutes run time after a full charge at 4 hours.

One user went as far as to test the battery memory by fully charging the device, waiting 30 days and then putting it in use. He came to the conclusion that suction power and its running time remained completely unchanged.

Providing a power of 23 air watts, it’s safe to say that suction power performs better than most. Users have had no problems picking up dirt, debris, pebbles and even catching flies in mid-air.

However, no matter how strong the suction is, you will find trouble getting rid of ground-in dirt since it doesn’t have the necessary tool to remove the dirt. Most users understand that this vacuum is not intended for that, but rather for cleaning up small dirt and debris.

If you’re someone that puts noise level as a high priority, then you’ll be disappointed in the DustBuster CHV1410L. Users have stated their dismay at how loud the device is after not expecting it to be.

Though others argue that it’s acceptable for the type of performance that the vacuum gives, and say that it’s no louder than many other handheld vacuum cleaners.

The overwhelming majority of user reviews that we researched gave a review after a week or month of using the product. You won’t be able to determine the longevity of a product after such a short period of time.

However, one user has said that his DustBuster CHV1410L is still going strong after using it twice a week, 30 minutes a time for just over 2 years.

Any doubts can be erased with the fact that Lithium Ion batteries have been proven to last over 5 years, and Black & Decker offers 2 years warranty with this model.

These are the following points we can summarize from our research:

The fact that the Black & Decker CHV1410L DustBuster is one of their highest rated and bestselling handheld vacuums in their current line of DustBusters speaks for itself.

Customers have seen the benefits of what incorporating a Lithium Ion battery can bring, and it’s only enhanced by incorporating it with Smart Charge Technology. There are little nuisances such as the bright blinking LED light during charging and the seemingly loud noise level, but the majority of users have experienced overwhelmingly positive results and through testimonials, they’ve attested to its outstanding performance.